As we reflect on our spirituality and our weaknesses this Holy Week, allow me to share with you something I wrote 5 years ago: 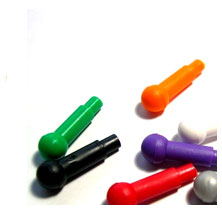 My hand hovers over the battlefield as I plan my next tactical move to defeat my opponent. It’s a battlefield that consists of a circular wooden base and wooden pegs standing on it. Although each peg seems similar from every angle, hidden in plain view inside the holes on the wooden base where the pegs hold foundation, are colors. And you only get to see them when you pull the pegs out of the holes. There are 4 pegs of each color; red, orange, yellow, blue, light green and dark green.
It’s a turn-based color memory game. You roll the multi-colored die that comes with the set and you try to pick out a peg that corresponds to the color you roll. If you get it right, that peg is yours. If you get it wrong, you put it back to its hole of origin. The winner would be the one who has the most pegs after the game.

My hand continues to hover over the pegs and I call upon the wisest of my innermost instincts to command my decisive motors. I need an orange peg. Having narrowed down my choices to three pegs, my hand stops over the north-eastern section of the wooden base. I could have sworn an orange peg was lifted from that section a few turns ago.  I’m just not sure which among these 3 the orange peg is. So, with total abandonment of all mathematical procedures of probability and intellectual analysis that I can do to come up with an intelligent choice, I crack my knuckles and do the eenie-meenie-miney-moe. My index finger ends resting on the left-most peg among the three. I pull it out and it’s a dark green peg. I slap my forehead in frustration.

My opponent rolls the die and in total irony of coincidence, he gets Dark Green. He pulls out the peg that I just put back and he rests it amongst the other pegs he has won. He’s up by 4 pegs now. The trend didn’t change until the game lasted. He gets a peg in every turn and I end up losing horribly to Daniel, my 4-year old son.

The great thing about memory games is how they push you to learn during each turn. Depending on the capacity of your memory to retain information, you learn which pegs are the ones you will or won’t need on the turns that will follow. By putting together all the information you gain turn after turn, yours and your opponent’s, you make intelligent and more empowered decisions on your next turns.

The last time I went to confession, it came to me that some of the sins I was telling the priest at that time were sins that I’ve already confessed before. And it’s not like I’ve only confessed them twice or thrice in my life. These were sins that I’ve committed over and over and over again. A serial sinner, that’s what I am. Ok, so I have this ultimate goal to reach for the kingdom of God and gain eternal life when I move on from this world. That’s the finish line I’ve always envisioned for myself. But being a serial sinner doesn’t really help much in achieving that goal easily. I’m like this guy who keeps picking the same wrong pegs turn after turn in the color memory game and not learning from them. So I made a personal resolution after that confession to be better and I asked the Lord for the grace, strength and spiritual will to overcome temptations and trials when they do come, which is quite often. Months after that confession, I’m still a sinner. But I make better decisions now. I try to learn from the wrong pegs.

So, if you’re like me who keeps picking the same wrong pegs turn after turn, making the same mistakes over and over again, may you learn from your falls, growing in wisdom after each trial, and may you realize that only by overcoming sin will there be victory in life and in spirit.

So there I was, in front of the color memory game with Daniel. He looks up at me and tells me “I won, Daddy”. And in a desperate effort to save face, I say “Yeah, well, I was working the whole day and I’m so tired.”